January 31, 2019
Lebanon is geographically embraced by the Mediterranean sea to the west and mountain ranges and valleys to the east, interspersed with natural springs, rivers, gorges, caves and grottoes. 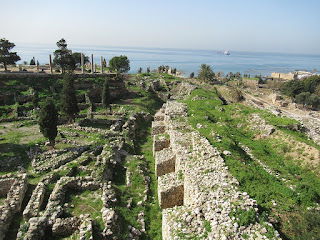 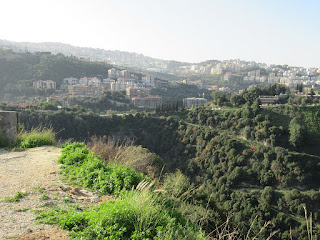 One of the biggest tourist attractions -- and with good reason -- is the Jeita Grotto, about 22 km north of Beirut and the source of the "Dog River", which as my Bradt guidebook says, has witnessed "the march of history for more than 3,000 years since the Egyptian pharaoh Ramses II felt the need to record...his successful crossings."

The grotto consists of two caverns that supply much of Beirut's water.  The lower cavern  is often closed in the winter when the water is too high (as was the case when I was there), but the upper cavern is breathtaking, especially with a sophisticated lighting plan that spotlights the fanciful figures formed by the calcified water drippings that create an awe-inspiring landscape of stalactites and stalagmites (including one of the longest stalactites in the world).

While tourist photography is strictly forbidden (cameras and phones are placed in lockers), I did find this video online.

Note:  There are several tourist sites in Lebanon where photography is not allowed, but it's not clear why.  One of my tour guides said it's because site management believes if people can take pictures and see them online, they won't want to come, but that defies logic and the reality.  For example, photography is welcome at many other tourist treasures, such as Byblos and Baalbek, and people still want to go, to see for themselves and be in the "real place".

My day trips outside of Beirut were with Lebanon Tours & Travel, which I highly recommend. From the grotto, my tour companion, Georgina (American, Washington, D.C. graduate student of Syrian background) and I walked downhill, past more recent sculptures and an interesting old-fashioned water mill. 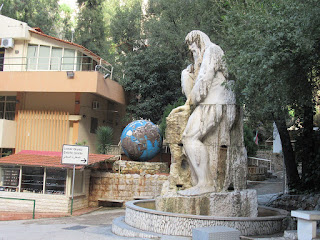 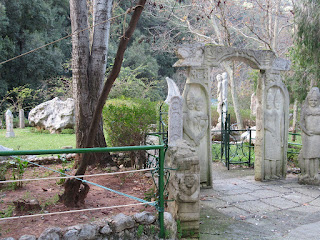 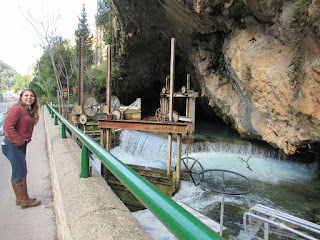 Our next stop was on high at Harissa, to see the 15-ton bronze (painted white) Lebanese Christian iconic statue of Mary ("Our Lady of Lebanon"), its small chapel for prayer, and the adjacent enormous, modernist St. Paul's Basilica, which seats 3500. 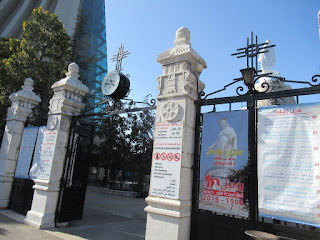 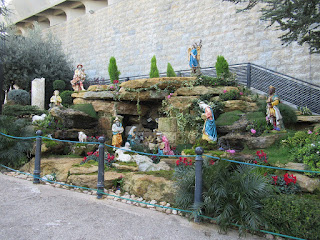 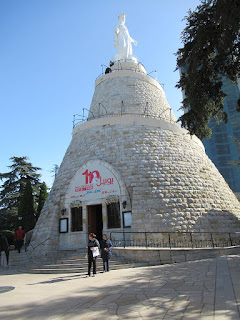 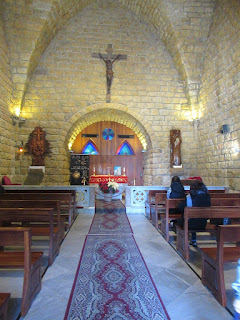 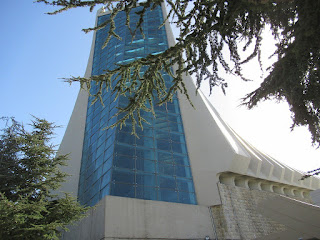 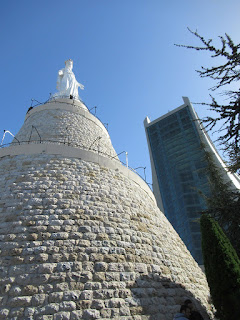 The square at the base of the statue offers a panoramic view of the overbuilt seaside town of Jounieh, which sprang up, unrestricted, after the civil war and today is an up-scale Arab "pleasure retreat" and resort, loaded with restaurants, clubs, and casinos. 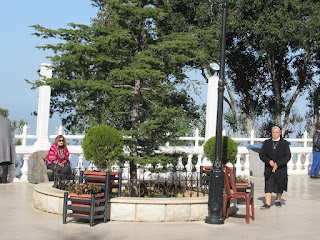 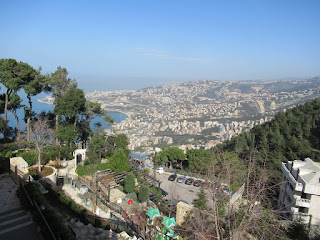 From Harissa we took the funicular railroad and then white-knuckle cable car over and down to Junieh... 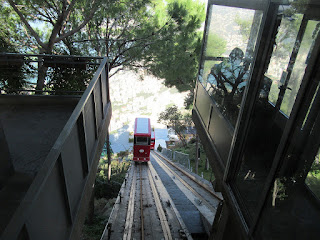 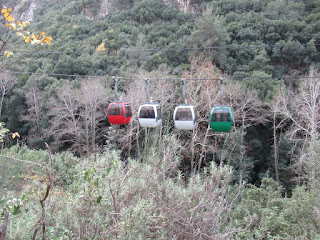 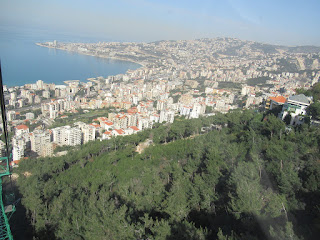 ...where at the bottom I saw a display that made me smile:  ice cream cones, cotton candy and shisha (smoking pipe) -- refreshments for the whole family! 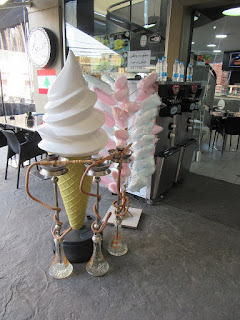 The final destination of the day was the world-renowned ruins of Byblos, which is at least 7,000 years old and may be the oldest continuous inhabited city in the world, including having served as a Phoenician port city.  (In 2013 the UN World tourism Organization voted Byblos the Arab world's best tourist city.) 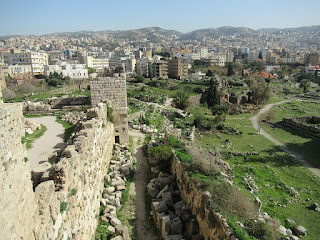 The city has many names, but was called "Byblos"by the Greeks (their word for "papyrus", or paper) because of the city's trade in cedar wood for making paper.  One of the Phoenicians' claim to fame was the first known alphabet, developed some 1,000 years BCE ("Before the Common Era", or BC; "CE = "Common Era", or A.D.) by the Phoenicians (again, in what is currently "Lebanon").  The Greeks adapted that 22-character alphabet, which ultimately became the "Roman"one we now use.  (The longest sentence in the Phoenician alphabet is on the sarcophagus of a Phoenician king, warning people away from his tomb, on display at Lebanon's National Museum in Beirut).  Thus, the Greek root of our Latin words having to do with books: e.g.,  Bible, bibliophile, bibliography, bibliothèque ("library" in French), etc.

The photos below show excavations in Byblos that mark thousands of years of history and numerous civilizations, including the Crusader castle (c. 12th C. CE) which is the tourist's first point of entry: 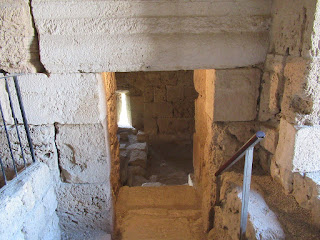 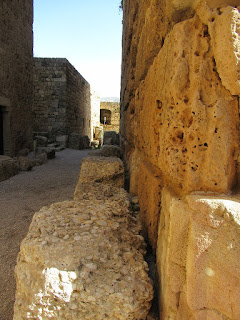 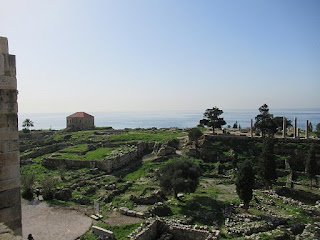 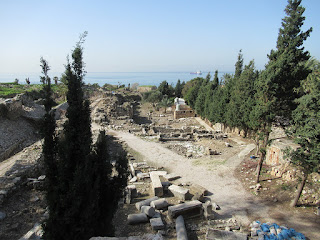 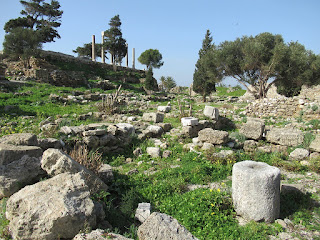 The ancient city of Byblos was discovered by French historian Ernest Renan and excavations occurred from the 1920s until the civil war in 1975.

Byblos is always being dug and discovered, while new sites are also constructed, such as the bamboo "Alphabet Pavilion" designed, built and presented by an international team of visiting architecture students: 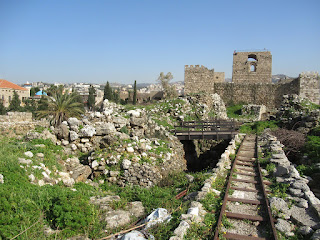 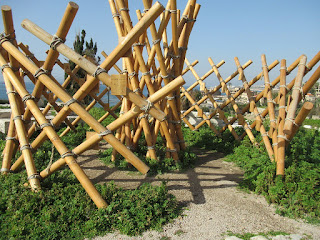 Byblos may have its ruins, but it also has its charming streets and restaurants.  In Lebanon, it's a toss-up as to whether the the better experience is the antiquities ... or the food. 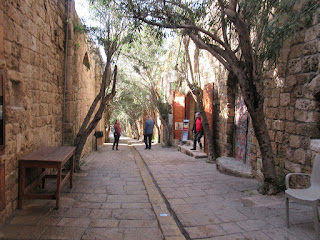