Showing posts from August, 2018
Show all 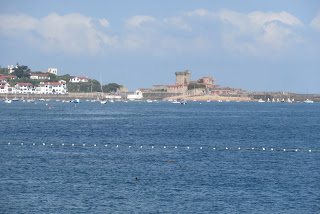 Coastline: St. Jean de Luz Although I'm not a beach person (even having grown up in Southern California!), it's August and EVERYONE in France goes to the shore ("littoral").  So I decided to go west to the Atlantic coast and explore some Basque country ("Pays Basque"), that strip of land in the Pyrenees separating France from Spain.  I decided against the heavily touristic Biarritz (and the only slightly lesser so Bayonne) and opted in favor of what I thought would be a less populated area, the beach town of St Jean de Luz, which I'd heard was lovely. DAY 1:  I stayed just outside of town, actually just about right on the beach, at Villa Argi Eder.  Owners Véronique and Pascale are a delightful couple. Only drawback was that they had a lot of family visiting, which included two NOISY little girls, with parents, grandparents and great grandmother all interacting with them, which made it a bit less than restful at times.  However, also had some great
1 comment
Read more
More posts