Today was Wednesday, 1.9.19 and the 9th anniversary of Gary's death. I spent the day exploring some of the 19th century in the 9th arrondissement in our favorite city, Paris. (The 9th is just south of Montmartre.) 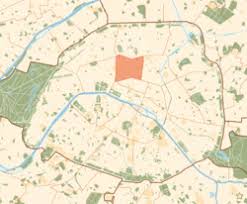 I first went to the "quartier" ("quarter", or neighborhood) of the Palais Garnier (or Opéra Garnier), truly a spectacular building whose lush interior I visited a few years ago, whose gilded late 19th c. statuary is in sharp contrast to... 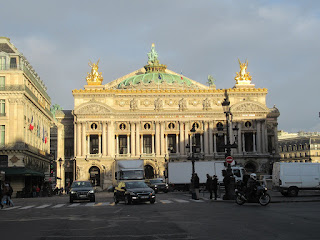 ... the Apple Store across the street, housed in what was once a grand private mansion. You couldn't tell, though, as the reconstruction has been so complete (and frankly, so awful), that instead of the original facade, the exterior is covered in trompe l'oeil -- painted to LOOK like the (presumably) original architecture. Yuk. 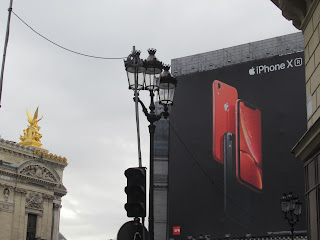 The Belgian chocolate franchise I'd seen in Ghent... 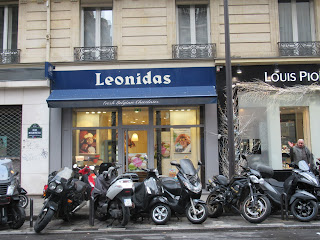 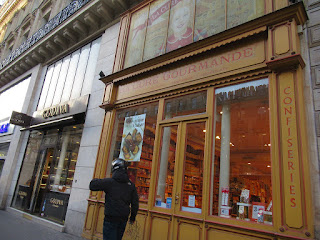 North a couple of streets from the opéra, along its swanky streets, toward Boulevard Haussmann ... 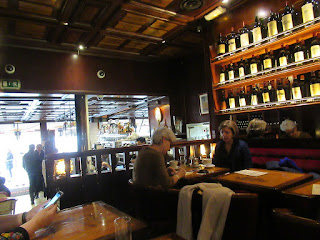 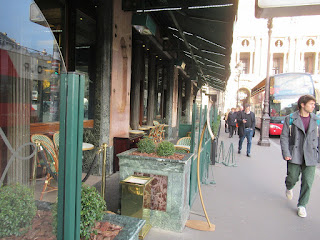 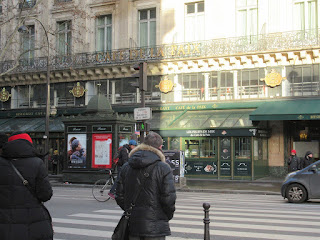 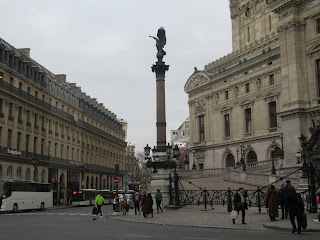 If you look carefully up along this west side of the Opéra, you can see Boulevard Haussmann, where the Grands Magasins (department stores -- the world's firsts!), Printemps (not visible, but on the left), and Galeries Lafayettes (sign barely visible on the right). I was going to visit at least one, since I've never been, but as I'm not much of a shopper, it was easy to get waylaid by the Fragonard perfume shop, especially since Gary and I had been to their plant in Grasse in the south of France. 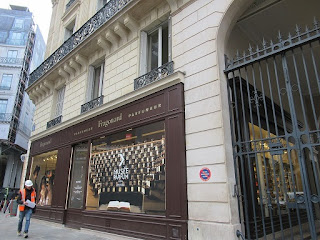 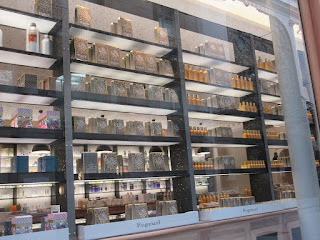 So, continuing on the west side of the Opéra to Impasse Sandrie on the left (coincidentally, Gary's sister's married name is Sandri), into the Square de l'Opéra Louis Jouvet, which houses the Fragonard museum that was once (19th c) part of a large theatrical complex, as well as a velodrome and in the 20th century, a manufacturing plant. 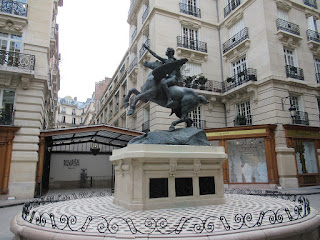 The statue in the square by 19th century French sculptor Alexandre Falguière is (translated as) "Pegasus Carrying the Poet Toward the Regions of Dreams", or "Dreamland". Riding on the back of the mythical horse is the famed 19th c. French writer, Victor Hugo (Hunchback of Notre Dame and Les Misérables). (I had read that information in a guide I had, and it was met with great interest by the museum workers from the Côte d'Ivoire in French West Africa, with whom I chatted before my museum tour. They knew the horse was Pegasus, but not who the rider was.)

The Square Louis Jouvet,also houses the famed Théâtre de l'Athénée, built in the 1890s, where Oscar Wilde's play, Salomé, which he wrote in French, premiered in 1896 while the playwright was imprisoned on multiple charges of homosexual acts with young boys. 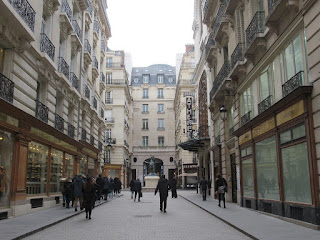 Walking up through and past that square, one goes past restaurants and a modern office building complex to reach the equally charming Place Edouard VII, where the Théâtre Edouard VII, which was built at the beginning of the 20th century, is still a favorite Parisian jewel box. 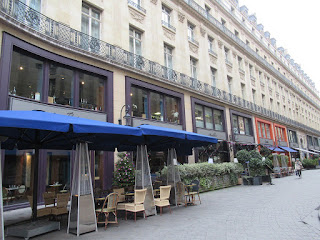 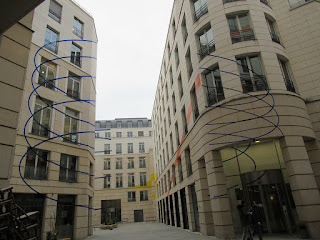 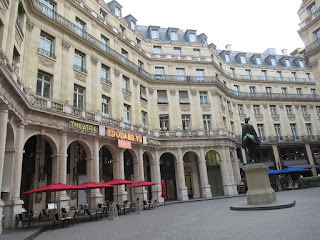 The 9th arrondissement was, in the 19th century the place to live, especially if you were in the arts -- or the mistress of a high-ranking personage. Up from the "flats" of central Paris, it was considered a healthier, less polluted environment where the interesting people lived -- and nowhere more so than La Nouvelle Athénes ("New Athens"), a small triangle that was home to a wide variety of artists, musicians, writers, and performers. The afternoon walking tour I took concentrated on this section of the 9th -- and of course, wouldn't you know it, the battery in my camera died, so the following photos were found online.

First we went to the Museum of Romantic Life, the former home of 19th century artist Ary Scheffer, built on land adjoining land that had once belonged to the Abbesses of Montmartre. The house was passed down through Scheffer's daughter (whose mother may have been one of his models), and features an impressive collection of artifacts and furnishings owned by George Sand, the 19th c. writer Aurore Dupin who grew up and lived with her many lovers in the region where I now live -- when she wasn't in Paris. 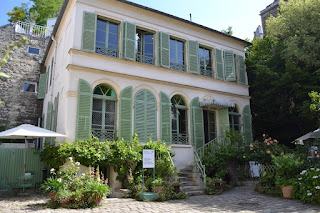 Sand was perhaps as well -- if not better -- known for her unconventional lifestyle (dressing like a man, taking a man's name, taking numerous lovers, including at least one woman, etc.), as well as for her broad circle of artistic friends and companions. One of those lovers was Chopin, with whom she lived at her childhood home, the estate in Nohant-Vic here in "the Berry" where I live, that she inherited from her grandmother, and which is now open to the public. But she also lived with him in Paris, though they had separate apartments in the still elegant Square d'Orléans, that we also visited... 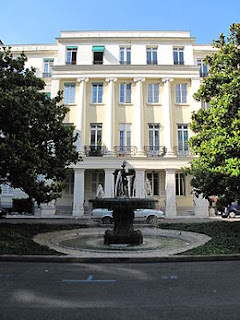 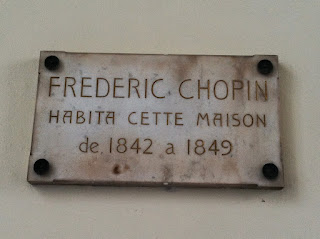 Our walk continued past several other area landmarks, including the Gustave Moreau museum...but probably the most fascinating aspect of for me of the 19th century artists' lives in the 9th arrondissement, was the élan and freedom with which they enjoyed life to the fullest -- intellectually, creatively, and sexually. I think I was born in the wrong century! ;)

This, in memory of my beloved "Frosie", who appreciated my love of France, the arts and...flirtation.