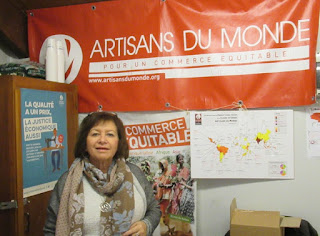 I've decided that in order to make this experiment of living in rural France work -- or at least have a basis for deciding whether to stay or not -- I need to integrate more into local society.  This weekend (Dec 8-9, 2018) presented itself with plenty of opportunities to do that -- starting with my first time as a volunteer (bénévole) selling products from the "fair trade"organization Artisans du Monde at the weekly Saturday market in Argenton-sur-Creuse (where I live).

The best-selling items are the coffees, especially the Ethiopian (I enjoyed telling one woman about the Ethiopian coffee ceremony), and  the chocolate bars. I picked up a few items to take to my dinner hosts tonight, and placed an order with the young woman at the stand next to ours for chèvre (goat cheese) to be vacuum-packed ("emballé sous vide") to take to Belgium for Christmas.  Plus, I identified sources for the first party I'll be giving, on  New Year's Day.

However, there wasn't much to do at the stand as my fellow volunteer Jean, a retired high school Spanish teacher, did all that needed to be done and enjoyed chatting with many of the locals. While I definitely felt like an outsider and language-challenged, I kept reassuring myself that this was to be expected, and it was why I was there in the first place. I eavesdropped as well as I could.  Seemed like a LOT of discussion was about the current street demonstrations against Macron, higher taxes and higher prices; sports; and family/ friends/ acquaintances. (just about what you'd expect in this setting).  This is a video of what enraged many French including Jean, who asserts that in a democracy the police should not be doing this to students.  Police, on the other hand, say how else are they to stop the students' violent, destructive and threatening actions?

Some pictures of our stand (and view from it) and the market, shortly after 8 a.m., before the mid-morning rush: 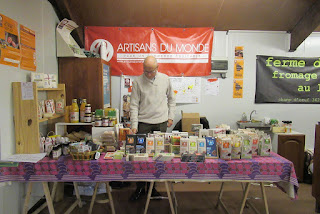 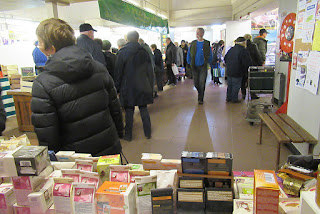 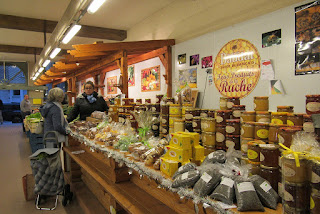 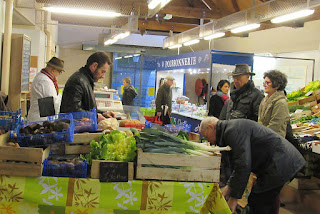 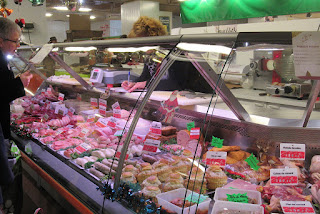 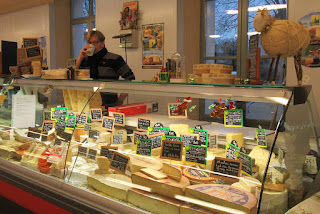 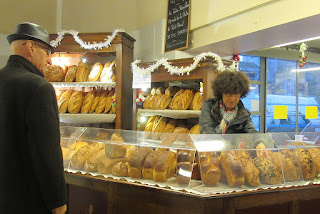 That afternoon (Saturday), despite the rain, I went about 40 minutes to Fresselines (the village I've written about in "Valley of the Painters" entries) to poet Christine's gallery "L'Oeil et la Main" (Eye and Hand), where she was having an open house attended by a number of people who'd been taking a workshop on the traditional Berrichonne language ("langue d'Oïl" of this region, "Le Berry").  It's always a pleasure to see Christine, who is my very patient and helpful writing coach for her spring and summer writing workshops.  I wanted to support her gallery, so picked up a gift for a French friend whom I expect over New Year's. 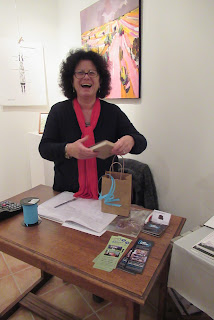 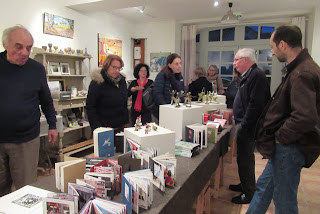 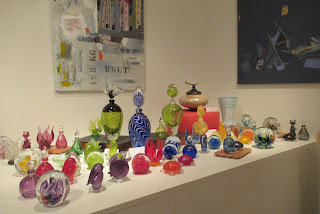 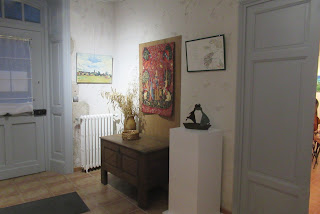 And Saturday evening was another absolutely delightful dinner party at Guillaume and Alexandre's bar-turned-into-house in Roussines, outside Argenton.  Fantastic company with their neighbors and friends -- a lot of laughter, wide-ranging conversation and excellent food (though the dessert thing was a bit excessive; we joked about becoming diabetics overnight), including a chicken that had most recently been in their backyard.  I  have so much fun with them all, and really appreciate how accepting of and patient they are with me.  They do laugh at my jokes and stories, but of course it takes me a while to get them out!  A & G are so bright, so engaging, so interesting (both teachers, both artists -- one a photographer another a pianist -- who go to India for the Christmas holiday) and have a home filled with amusing "bibelots" ("chotchkies").  They're also both very funny.

Late nights typically involve plenty of alcohol, and the police are cracking down now on drunk drivers, so hosts are more and more making their extra bed(s) available to guests who've perhaps had a bit too much to drink.  I have to confess:  I had (though said "no" to the last wine pouring), but still drove the some 20+ minutes home.

Sunday was another busy afternoon and evening, after getting up late and having my proprietor and her b.f. come by to fix a couple of things. I was headed to another gallery open house, this one in the village of Rancon, but took a quick turn first to go two minutes out of my way to visit the grounds of the nearby Buddhist temple, Tung Lam Linh Son  It's open to the public daily, so I'll have to do a more in-depth visit sometime. 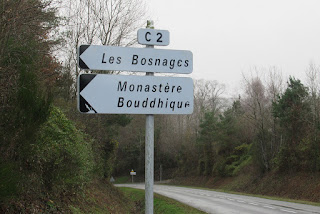 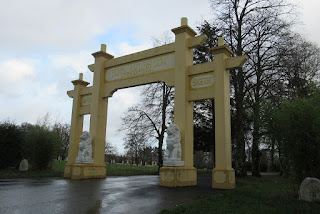 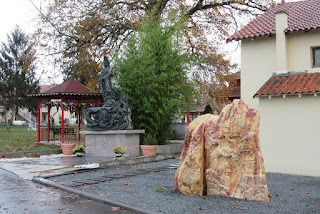 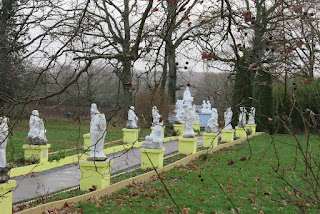 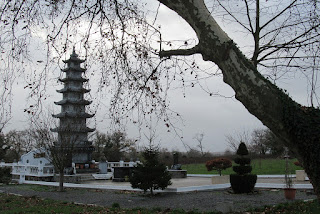 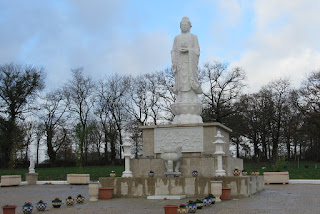 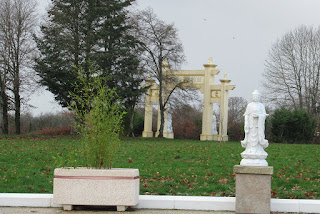 At her Galerie Vanlick (about which I wrote in a prevous blog entry) painter Sandra offered us a chance to try her technique of acrylic paint and knife (something that I don't think I'll ever master!)    I also got a chance to again see her son Léo's internationally recognized and awarded "steampunk" sculptures based on Jules Verne's stories. 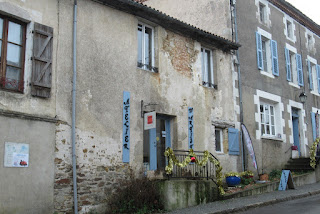 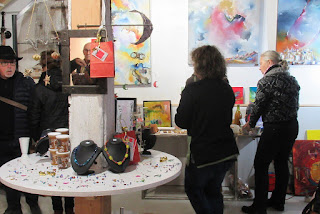 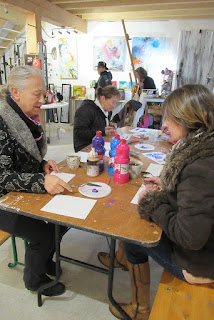 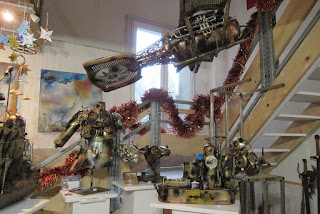 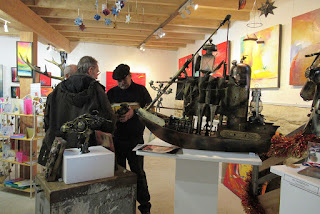 And to top off the evening, a Christmas chorale (plus singer/guitarist) concert at the church in the village of Dun le Palestel, offered free of charge (with just a charitable donation requested) by Entente Cordiale, the region's franco-anglo social organization.  (I took a couple of videos, but for some reason, they're not uploading here.) The place was packed! I had a chance to see my dear friends Rachel and Jamie, have some conversations with new acquaintances, sip mulled wine ("vin chaud") and munch on delicious sweets and savories.

A lovely weekend of "integrating"!