November 28, 2017
The past several days have created that space where the newness of my life here has intersected with my life's familiar realities: a sort of Venn diagram space, if you will.

My brother, Cleve and his wife, Gill, came for four days, arriving the evening of November 23, the date of this year's Thanksgiving (celebrated in America, not here in France).  They now live in England, as Gill is English and wanted to be back close to her family, after spending seven years in the U.S. with Cleve.

Since they were arriving Thursday night, I planned a "Thanksgiving meal" for the next night, Friday, and invited my next-door neighbors, Linda and Sam, who are also my landlords.  I also extended an invitation to another woman I had met, whose husband is working in Afghanistan.  Of the six of us, two were American (my brother and I), three British, and one -- Sam -- Moroccan.  I made turkey breast and legs, stuffing from scratch with stale French bread (which turned out quite good), carrots, haricots verts (slim green beans), mashed sweet potatoes (which actually were imported from the US!), and a fruit coulis of jarred cherries, kaki (a Japanese persimon), dried cranberries, orange juice, and red wine.  Of course there was fresh French bread, and plenty of wine. Bought an apple tarte for dessert, with whipped cream (creme chantilly).

The familiar reality was cooking; the new life was doing so in this kitchen, with wood stove coming in handy for keeping dishes warm on the top;  and with the ingredients I could find (couldn't find sage, so substituted "bouquet garni"; day after the dinner and we were standing in front of a shelf, and "souage" was right in front of me!).

Familiar reality was entertaining, with conversation among practical strangers starting with the weather, and gradually evolving into more in-depth and challenging topics.  New life was talking about Brexit, life in France among ex-pats, life in rural France with a new friend who knows how to forage for natural foods, raise horses, and breed sheep.

New life was visiting sites in the area, finding an excellent restaurant on a Sunday. 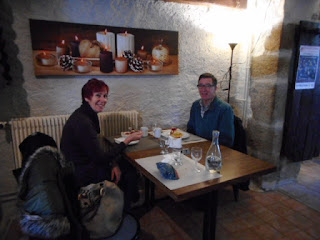 Also visiting Montmorillon, the town where I think I want to settle, and hearing Cleve and Gill say, "This place has your name written all over it".  Familiar reality was running into a man I'd gone out with a few times, and dealing with the awkwardness of that, both in person and via email.

New life was my brother helping me with the wood fire and advising me on being an ex-pat; familiar reality was his helping me sort out (that's one of my new British expressions!) a variety of tasks and issues that had befuddled me.  Familiar reality was our fight; new life was our realization that there are only two of us as siblings, no other "blood family" left, and we don't have enough time to let the old issues fester and take over.  The new life was also coming up with a signal between us when one was pissing off the other -- and then laughing at how we immediately resorted to vigorously using it when Gill came back from next door with the hatchet Cleve had requested to chop some wood.  Even Sam next door got into the joke -- asking Gill if we wanted TWO hatchets!!