Am just starting to feel the ex-pat downslide that I expected 3-4 months in, but which is hitting me now almost 6 months after coming to France.  Seems to be a combination of loneliness, depression, and frustration with the French way of life/systems, and overall malaise.   Everything’s starting to look and feel the same; the pixie dust in my eyes has been washed out; I’m no longer seeing “la vie en rose” (life “through rose-colored glasses”). I wish I had a partner; I miss the lifelong partner I did have, with whom I indeed once traveled around France. I miss having a partner who could help and share some of the burdens and responsibilities – and the discoveries and beauty. And yet, I do value my independence….

I have to keep reminding myself that this has all along been (supposed to be) an ADVENTURE, not a “life sentence”!  I didn’t feel “done” at the end of my time in the Limousin, especially as it has been a long, raw, very wet winter, stuck in a dark, cold cottage that required constant attention to the wood fire, and the dirt, dust and ashes that covered everything.  However, I otherwise spent the time well, I think, and because not feeling finished yet here in France, I found this charming town, and a charming rental house . 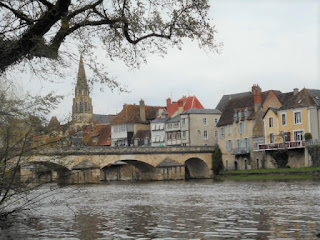 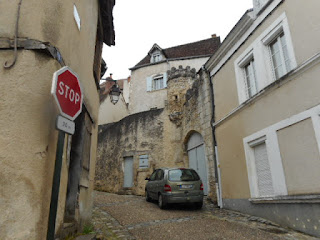 Nevertheless, the process of getting settled has been exhausting – while at the same time admittedly instructive – learning about buying a car and furniture and appliances (my biggest expenses being washer/dryer combo,  refrigerator, and a $600 mattress); insurance; rental agreements; ordering water, electricity and sanitation services; ordering internet (and finding it when I don’t yet have it); and perhaps the most challenging, healthcare (I don’t yet have my carte vitale; that’s the next – and hopefully last – big step). “What do you call it?” and “How do I do that?” are probably the questions I most often ask.

When the electricity suddenly cut off overnight a few nights ago, and the proprietor said I’d have to pay for any electrical work, I immediately went to Plan R in my head, which was to just walk out the door and take the next train/plane back to U.S.  Of course, none of that was needed.  The electrician came, he sorted everything out (found out that the utility company was delivering less power than for which I’d contracted!), and all was well.  Just walking away, though, has ALWAYS been an option for me…

One of my biggest challenges has been clothes-washing.  I (think I) made the right decision about the washer/dryer combo I bought, as I definitely wanted a dryer – especially with the never-ending rain we’ve been having!  Do NOT want to deal with hanging things outside on the line, nor on a dryer rack in the middle of a room (especially challenging when there are sheets and towels).  However, the machines operate differently than they do in the U.S.:  they run at least twice as long, and in some cases, it can take up to 4 hours to wash!!  Instead of chug-a-lug-, they go chug….(wait)…clunk….chug…  Friend of mine says it’s probably easier on the clothing, not being sloshed around so much, but can’t say in 50+ years of keeping house and raising a family that that’s been an issue…

There are some myths about France that need to be debunked:

a)      The food: really, not so great.  Same dishes everywhere, depending on region.  On the other hand, occasionally I’ll come across a place that serves something a little differently, and with a pride in using local products and/or in presentation, that makes the expense worth it.  (Note:  Lunch in restaurant typically about 12E or $15; double that for dinner).

b)      The bread:  the ordinary baguette (long, thin) that everyone eats is absolutely tasteless, unless served fresh (as always is) with a main dish that has a lovely sauce.  Otherwise, need to look for “six céréales” for some substance.

c)       Yes, the wine is fantastic, and affordably priced (though you can certainly find bottles for $20+), but for all the hoo-hah about the cheese, it’s typically soft (consistency of camembert, brie or chèvre), and I prefer a harder cheese.

d)      As for the meat – there I was in the middle of the famous “Limousin beef” region, and each time I tried it, it was tough and tasteless!  Obviously the key is to cook long, slowly, with plenty of wine – but oh, how I can’t wait to get my knife-and-fork around a good steak!

e)      I imagined spending my days/weekends wandering around France’s famous street markets to find fresh food and produce, and going to brocantes (second-hand shops or markets) for formerly loved treasures for my home.  Well, you can find fresh produce and greater variety at the supermarché at better prices (unless you’re a real purist about sourcing and thus willing to pay an extortionist’s price).  As for those “treasures”?  The French love other people’s discards, and most of the brocantes, especially those held in local parking lots, offer little more than junk. You have to really know the venders AND what you’re looking for.  You’ll have better luck on pricing at stores “d’occasion” (used). (I’ve bought most of my new home furnishings from two in particular.) Don’t be fooled by shop signs that say “antiques”(“antiquaries”are the real thing), and there’s not much difference between some “brocantes”, “marchés aux puces” (flea markets), “vide grenier” (attic sale) or “depot vente” (consignment store).  There’s a lot of crap.  Of course, there’s also the occasional “find”, the price of which you can negotiate…

1)      France is VERY technologically advanced, in some ways.  Everything revolves around conducting business/setting up systems/securing, either by phone or internet.  Truly amazing what they can do with those electronic/computerized things.  And very affordable:  through La Poste (the post office, which offers a variety of nationally subsidized services), I’ll be paying 38E (about $47) a month for internet, fixed phone (land line), TV (umpteen French channels – but I don’t even have a TV yet!) AND mobile phone service (already had the actual phone) that gives me unlimited calls and texts in France and Europe.  HOWEVER… there are very few public places to find internet service;  if you don’t have it at home, or the library’s system is down (“en panne”) – and the local libraries are open rather odd hours – then you’re pretty much out of luck.   Well, actually, MacDonalds all have free wifi!  For folks who may not have internet access OR knowledge, there are few ways to get either, yet they also need it for the services they’re getting!

2)      France’s healthcare:  Well, yes, it’s true that anyone can access it – WHEN it’s accessible.  And this might be a deal-breaker for me – or I may have to move to a larger city.  There are very few specialists (e.g., opthalmologists), especially in more rural areas, and that includes dentists!  They don’t work particularly long hours, so if you have a need, for example, evenings or weekends, then you need to call an ambulance or seek other emergency service.  That may require a visit to another city, which could be a two-hour drive.  The emergency service will also, apparently, ask you so many questions that you may, indeed, be dead by the time they arrive.  I keep hearing horror stories that do NOT encourage me to stay.  (I’ve been told medical personnel don’t want to have to pay the taxes required of working longer hours, and so prefer the shorter time spent professionally; interesting juxtaposition to the American capitalist model in which being a physician is a money-making enterprise.)

So, those are the complaints…and complaining is definitely a symptom of the ex-pat blues.  As is the loneliness:  everyone here seems to have a “partner”, but of course, that’s probably because most ex-pats here came up with adventurous idea of, “LET’S (as in “let US”) move to France!”,  not “I’M going to move to France!”  Also am disappointed that things haven’t worked out with my brother, who lives in England,  and that my grandson isn’t going to be coming back with me upon my return next month, after two-week visit to States, as I’d hoped.

And, yet…I’ve had three friends from the States come and visit.  I have some new friends here.  I’m starting to get involved in activities and am exploring the local cultural scene (went to a performance by a traditional French singer the other night). I have this beautiful country to explore and to use as a base for other travel.  Just yesterday I went two hours (didn’t think it would be that far) to the area in “Le Berry”region (where I now live), around St. Amand Montrond to see an abbey, where I bought souvenir products for friends made by monks in other abbeys, and a chateau.  Had a lovely lunch and nice conversation with the proprietor, who had just opened her new place.