October 31, 2017
Oct. 30
Went this morning with landlady/neighbor Linda to Les Herolles, the monthly (29th of the month) "foire" -- which means "fair" in English, but is actually a HUGE outdoor market (some say largest in France).  However, I think for me it will be a one-time "af-fair", since I've been to many (food, flowers, clothing, lots of live animals -- mostly poultry), and it's not as pretty as others I've seen in France, such as the one right outside my apartment on the river in Lyon.  It was interesting, though, to see all the people in their daily French lives, and we wondered from where they'd all come, since they certainly don't live in our bourg or neighboring village (St. Sulpice-les-Feuilles) -- though Linda says there are about 300 residents in Mailhac (really?  Where are they?), and about 1500 in the greater St Sulpice township. 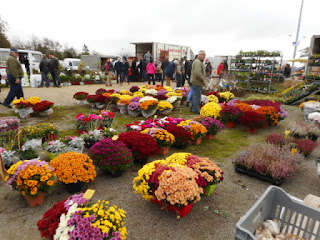 What I did enjoy, however, was my computer breaking down (en panne).  Well, of course I didn't like that I suddenly couldn't connect to the internet  via wifi, and couldn't figure out how to do it, even with online instructions retrieved via my electronic tablet.  I was very frustrated, but decided to meet the challenge head-on and was pleased with my resourcefulness.  I found one possible repair place in La Souterraine, so headed out that way (about 20 minutes' drive), with a stop at the local Peugeot dealer to see if a mechanic could put my car's clock back an hour (which he could -- finally -- admitting it was "très compliqué").  With the help of the GPS (pretty essential for finding one's way around a small medieval town with lots of narrow, winding roads), I found the shop for which I had an address -- but it was closed (being Monday, when many small enterprises are closed).  So I stopped in an "immobilier" (real estate office), where I gave the woman my requirements for a more permanent rental, and asked her if if there were another computer repair shop.  Turns out there was, just down the street, and Guillaume there was terrific and re-opened my wifi connection,  made it easy for me to find, AND fixed the problem with my driver, ,which I didn't even know I had!  Only cost me E20 ($23+).

I felt more of a resident, than a tourist!

Oct 31
Today was supposed to be the day "du bois" (wood day -- and coincidentally, my mother's maiden name was Du Bois), and indeed the wood arrived early -- about 8:30 a.m., even though we were expecting it later in the afternoon.  Linda was going to call her friend Wendy, who'd offered to help unload and stack the wood, but since he got there early, I helped, of course.  Then I went off to enjoy some great conversation with Pierrette, who owns "La Presse"(shop for newspapers, magazines, some toys, office supplies, books, etc.).  We seem to get along very well; she's from Alsace, but speaks a very clear, correct French (as opposed to with an Alsacian or German accent), so I understand her perfectly -- and welcome her correcting my French!  I buy something from the boulangerie (bread shop) a few doors down, then take it into La Presse, where I can have a café and read the paper (in French).

I made a rather big deal about this being wood delivery day, that it was going to be the first time this city girl had ever done that, etc., and made sure I came home well in advance of when we were going to carry it in bags through my house to the backyard.  When I drove into the parking area -- which  had been full of wood when I left -- it was empty!  Turns out Linda and Sam's friends had come early and had finished the whole job.  See pix  below.